“Yanagihashi Kabuki” is held every year on the day before Respect for the Aged Day in Nakatamachi, Koriyama City, Fukushima Prefecture

A unique Japanese style musical that was groomed in the Edo Period. The word “kabuki” was born out of “kabuku”, which means a strange appearance. It is a comprehensive theater in which elements such as dance, music and subject plays (kamokugeki) are put together, and has only been played by men since 1629. The actors who play female roles are called “Onna-gata”. 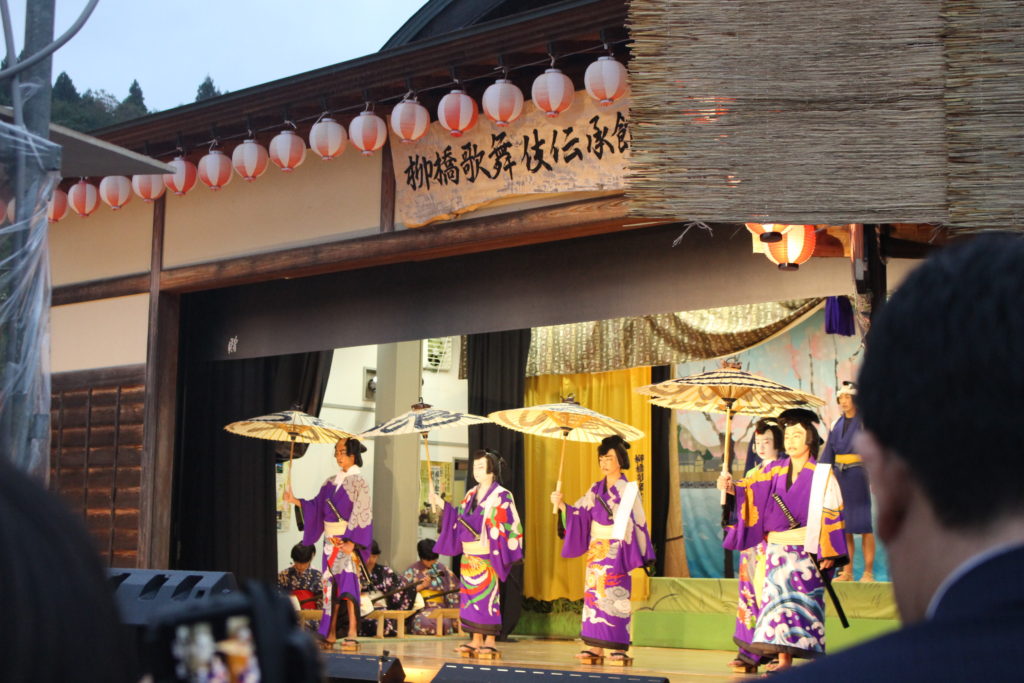 “Yanagihashi Kabuki” has been passed down from the Edo period to Yanagihashi in Nakatamachi, Koriyama City, Fukushima Prefecture, an area surrounded by mountains in the Abukuma Highlands. According to a tradition, it is said that traveling artists lived here during the Bunka and Bunsei time during the Edo period, and that these people were the ones who passed on the tradition of kabuki. In addition, it is said that the area was directly governed by Tokugawa Shogunate, and it was relatively relaxed in terms of collection of nengu (annual taxes). Thus various forms of entertainment were actively carried out. In 1820 Dainojo Nakamura dedicated Kabuki to the Sugafune deity, which is considered to be the beginning of Yanagihashi Kabuki.
While Yanagihashi Kabuki had been repeatedly suspended due to wars and lack of successors of gidayu and shamisen players, it has been resurrected. 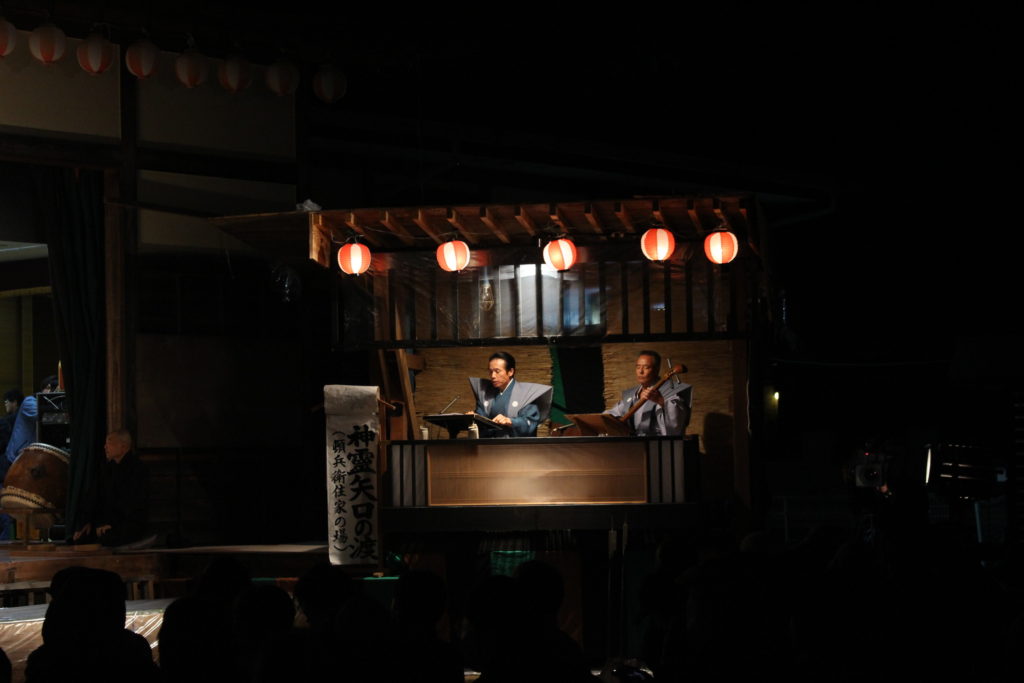 The Yanagihashi Kabuki Preservation Society was established in 1980 and has held performances every year since then. In 1983, Yanagihashi Kabuki was designated as Important Cultural Asset by Koriyama City, and it received the “Furusato Kirari Award” at the 21st National Hometown Event Grand Prix. Yanagihashi Kabuki has been passed on by the members of the preservation society to the local junior high school students.

There are costumes, wigs, and props (from the late Edo period to the beginning of the Meiji period) that had been stored in the preservation society’s storage. Among those, 17 items were declared as important cultural properties by Koriyama City in 2003. 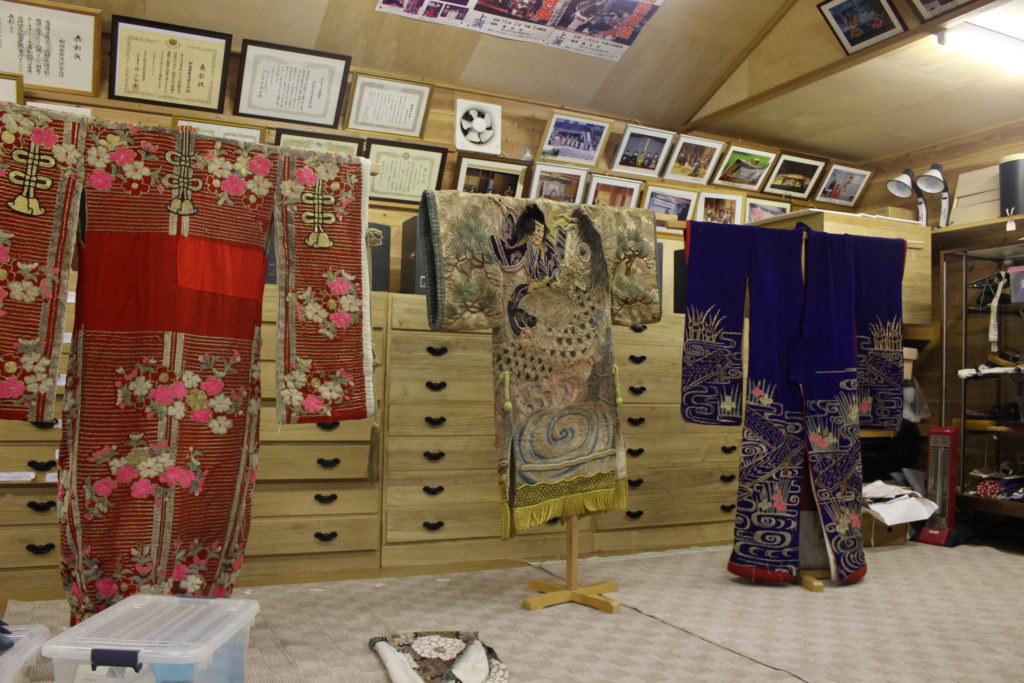 (↑ Costume used from the Edo period) 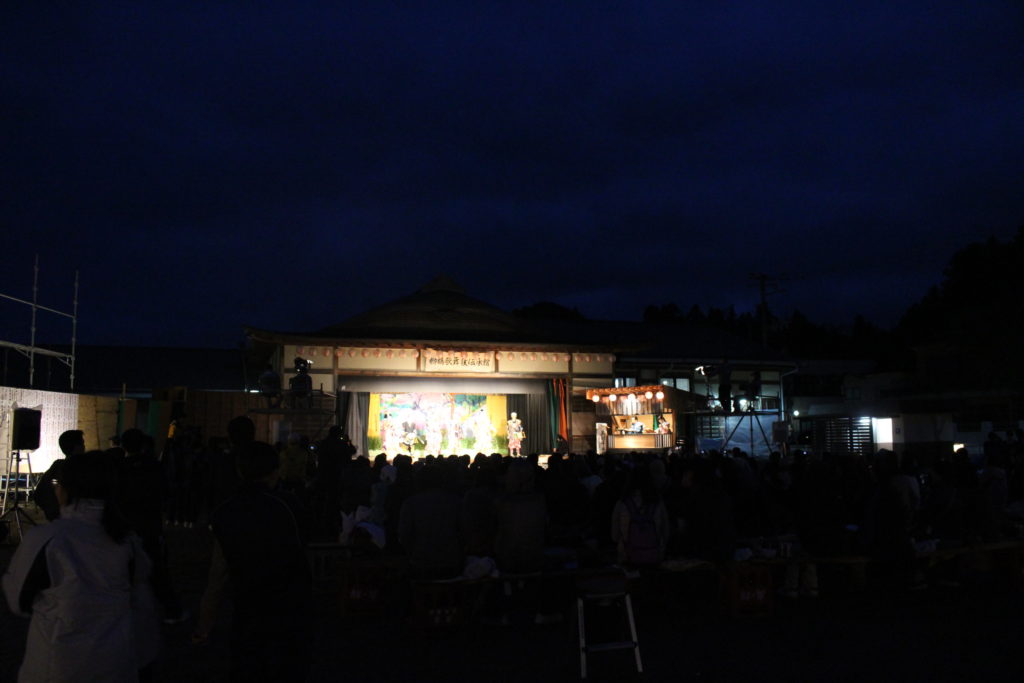 (↑ The stage in the dusk is a beautiful sight to behold) 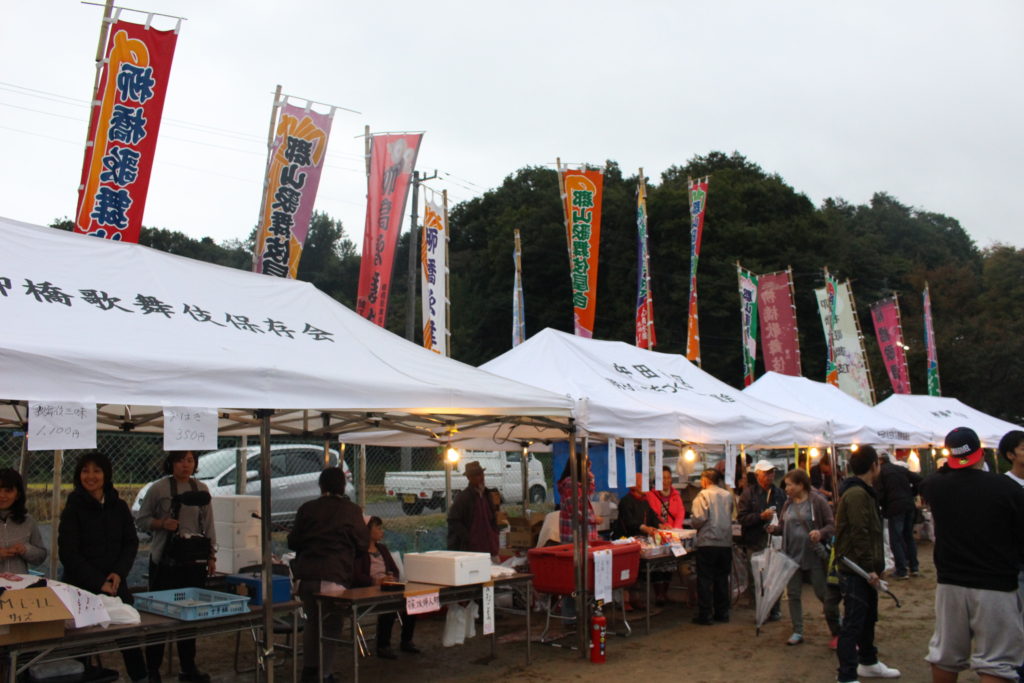 (↑ Stalls at the venue. You can try goldfish scooping. Children and adults enjoy the festival for one limited night.)

1810
Dainojo Nakamura dedicated Kabuki to the Sugafune deity, with specific writing on the chest owned by the preservation society in October, 1810.

1840
There is a record that Kabuki (Yoshitsune Senbonzakura: a puppet theater masterpiece) was performed at Yanagihashi village and Konomezawa village. The cosmetic tools used at that time have been kept till today.

1925
There was a big fire in Yanagihashi village in June and many books about Kabuki were lost.

1940
Kabuki was interrupted by the World War Ⅱ.

1947
After the end of the war, Kabuki was revived as Youth Kabuki, and it was dedicated to the Sugafune Shrine during the Autumn Festival. 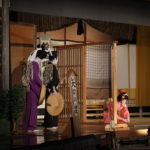 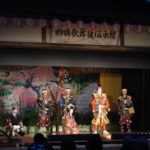 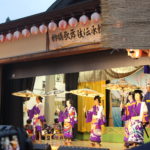 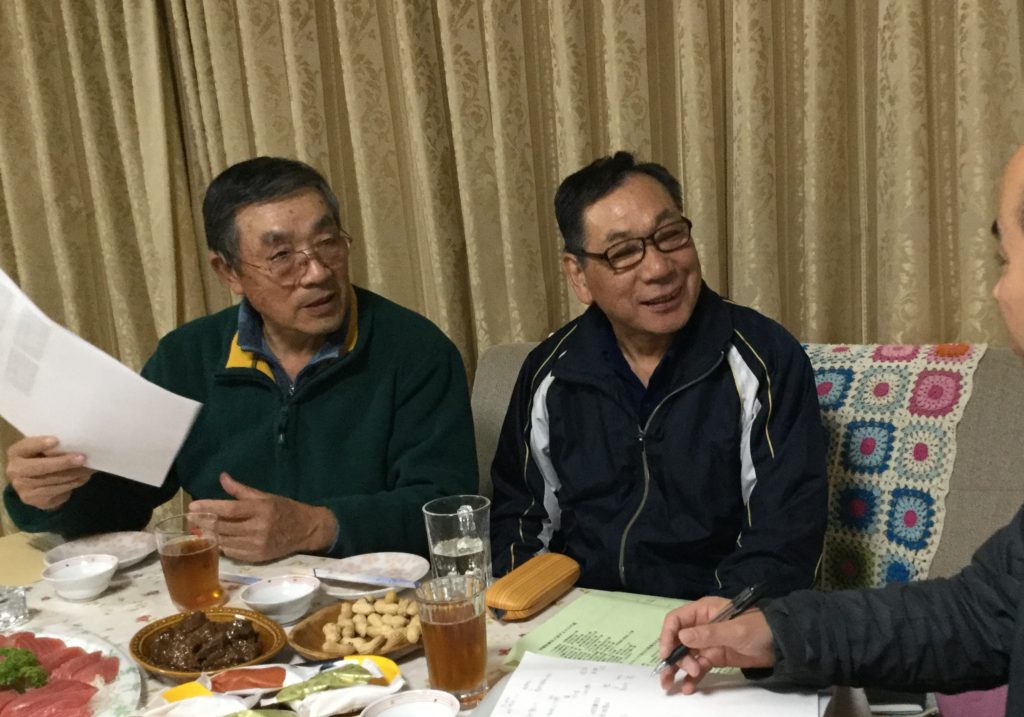 ◆How many plays are there in total and how long do you practice?

There are 17 plays in all, and every year we perform three out of them. Yoshitsune Senbonzakura (Yoshitsune and the Thousand Cherry Trees) has been played every year by junior high school students for 20 years. It is difficult to learn Kabuki, and it takes about a year to remember one play.

◆What are the difficult aspects when you perform Kabuki?

The actors must act in accordance with the gidayu (who serves like a conductor) and the shamisen players, but many other people are involved, such as kuroko (who wear black clothes and serve as stagehands), and those who are responsible for the set, lighting, music, costumes and makeup. It is crucial that all these people do their job well.

◆What are your future goals?

The comment after seeing Yanagihashi Kabuki (by the interview staff)

I saw kabuki for the first time and I was worried if I could understand the play because kabuki actors have unique traditional talking styles. But surprisingly, it was easy. If you read the overview before the play, it helps you to understand more and makes the play more enjoyable. 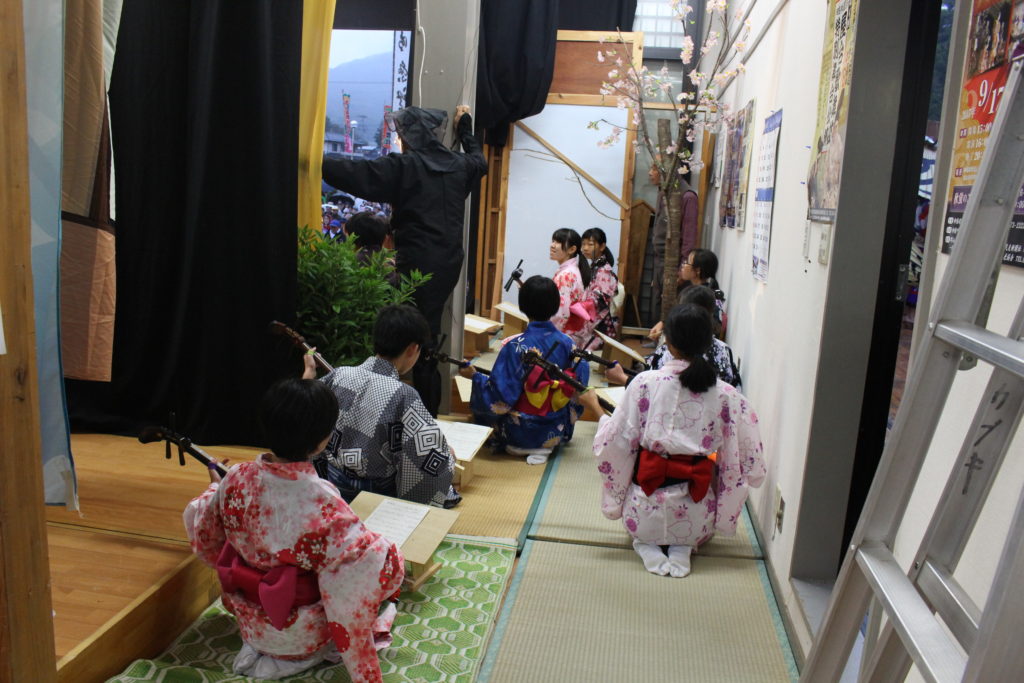 According to the record by the Yanagihashi Kabuki Preservation Society, the play acted out by junior high school students dates back to “Ichinotani Futabagunki, Sumanoura Uchi no ba” in 1995, at the Asakakunitsuko Shrine Autumn Festival Kabuki Revival Event.
After that in 1997, “Kotobukishiki Sanbasou Ichinotani Futabagunki, Sumanoura Uchi no ba” was performed at the renovated junior high school gymnasium during the school’s 50th Year Anniversary Ceremony. In addition, in 1998, “Ehon Taikoki, Judanme Amagasaki Kankyo no ba” was presented at the Asakakunitsuko Shrine Autumn Festival Kabuki Revival Event.
The school started to implement the kabuki class as part of integrated studies in 2006, with the intention of passing on the proud traditional performing art (initially it was an elective as part of the integrated studies). Since 2005, all the students have started to participate in Kabuki, and learned by selecting their favorite courses from acting/ stagehand/ music / accompanying orchestra/makeup. The students give the Regularly Scheduled Performance of Yanagihashi Kabuki annually, as well as the “Kabuki Class Persentation” at the school’s “Mitate Festival”. 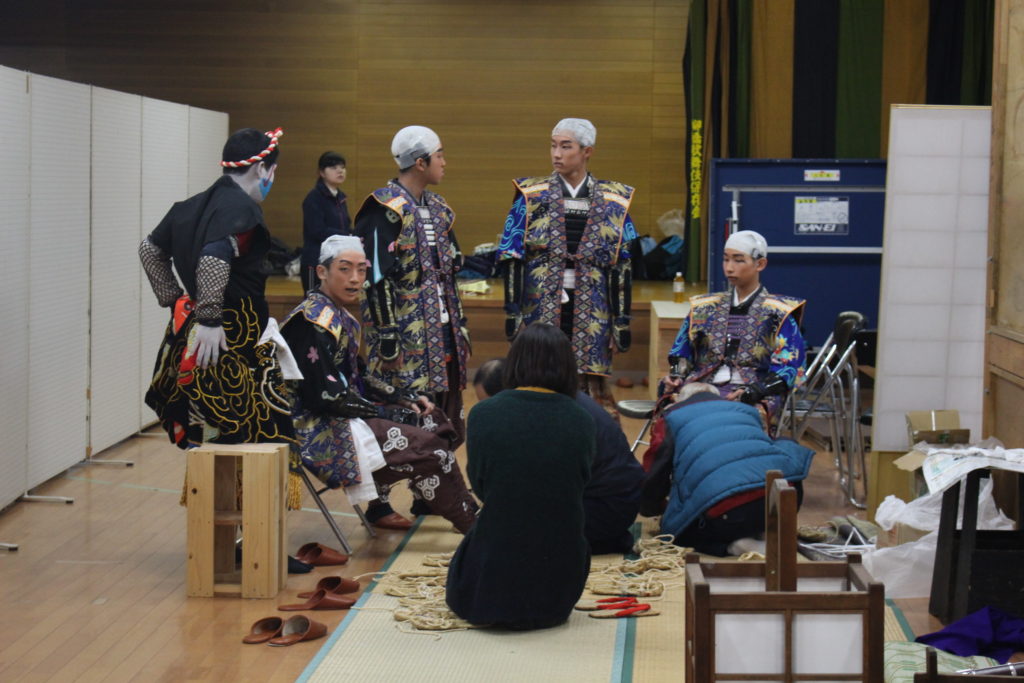 （↑The back stage: before to the presentation） 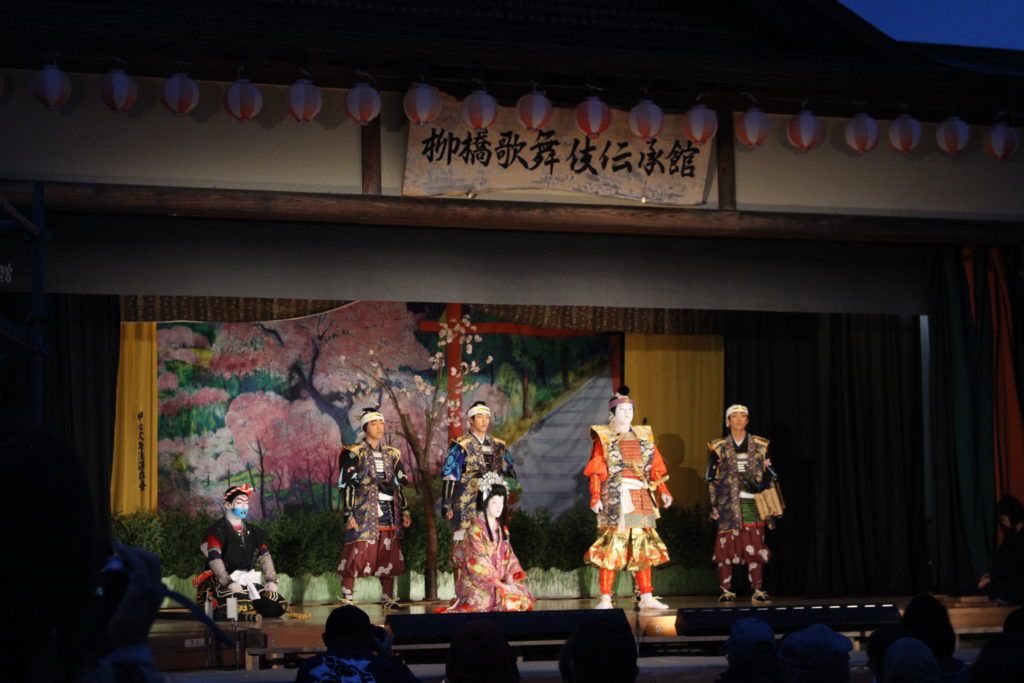