IDATEN from Sukagawa!!
“A Story of a World-Class Runner, Kokichi Tsuburaya”
― Walk Around Sukagawa for tracing his path. 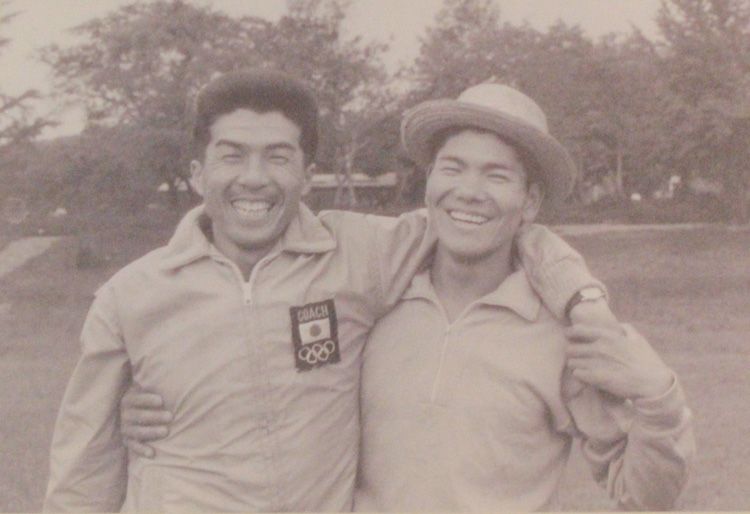 ↑Kokichi Tsuburaya on the right, and his coach Hatano on the left. Both had big smiles.

The Tokyo Olympic Games are coming! It will be the second time that Tokyo has hosted. A torch relay will start from Fukushima prefecture, go around Japan, and head for Tokyo, planning to hold the event as a symbol of “Restoration” from the disaster occurred in 2011. It is so exciting to think how the athletes from the world will perform at the games grabbing the world’s attention, after doing all the efforts.

In Olympics, there are dramas of athletes and those who are related to them, as well as the concerns about the results, win or lose. In Tokyo Olympics 1964, performances of one track and field athlete caused a great excitement in Japan. His name was Kokichi Tsuburaya, “IDATEN (: Buddhist deity who was said to run very fast)” from Sukagawa city, Fukushima. But sadly, he passed away before the following Olympics in Mexico City although people focused on him as a hero of the Tokyo Olympics and expected him to perform better. To learn more about him, we visited Sukagawa City, where he was born.

Kokichi Tsuburaya was born in Sukagawa City, as the youngest of seven children of a farmer’s family. His siblings cared about him very much. In his childhood, he used to run around outside with his brothers, but he helped the housework, too. In the summer of his second year at high school, he saw his brother Kikuzo and brother’s friend were on running, and decided to join the track and field team. His career path of an athlete started when he established a new section record in an Ekiden (marathon relay) Race running through Fukushima participated as an alternative runner.

After graduated from high school, he joined Japan Ground Self-Defense Force (JGSDF), and was assigned to Camp Koriyama. At that time, they did not have a track and field team, so he worked on by himself. Later he started a team with his senior personnel who offered help. Gradually more people who liked Kokichi’s personality joined the team, and his stamina and speed increased by training with them. As a result, he got a recommendation for JGSDF Physical Training School, which was called “the center for potential Olympic medalists”. His fulfilling days were spent there being given dedicated coaching, and studying training methods himself too.

At the track meet for candidates for Tokyo Olympics 1964, he achieved a national record in 10,000-meter race, and held the second place in the marathon category. In spite that he ran only two races after he had started his first marathon, he became an Olympic runner. 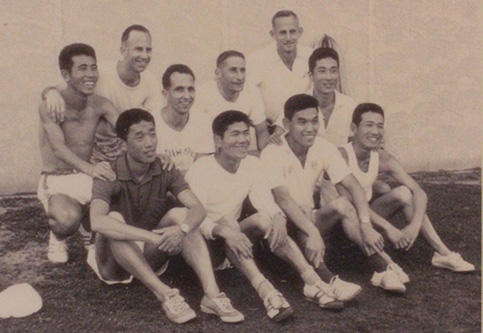 Then the Tokyo Olympics 1964 came. Kokichi won a bronze medal in marathon, and the 6th place in 10,000-meter race, which means he achieved prizes in two categories. He was the only one from Japan who ran both races of marathon and 10,000-meter, and also won a medal in track and field. His achievement caused a great excitement in Japan. About his performance, he said, “I felt like I was not running alone, and being pushed his back (by everyone)”. 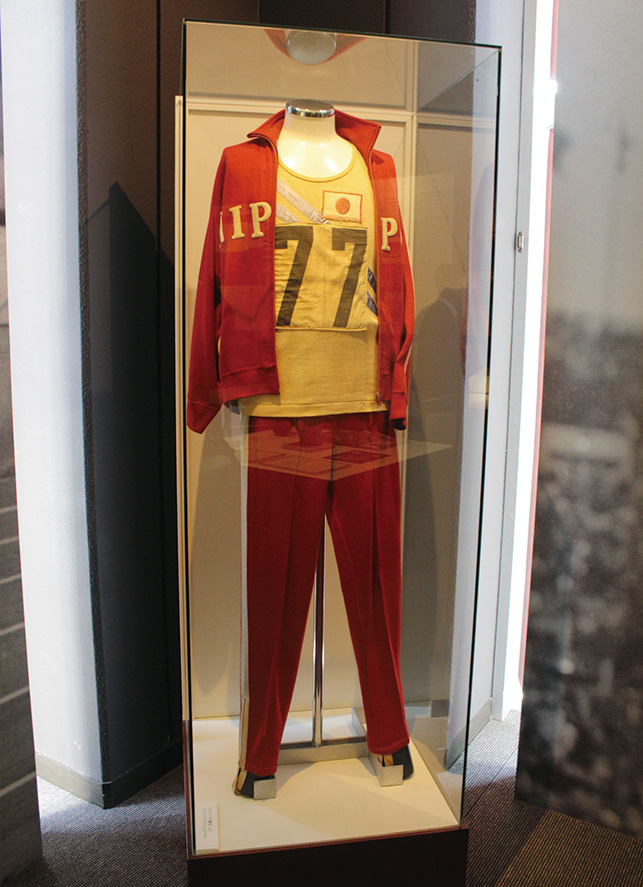 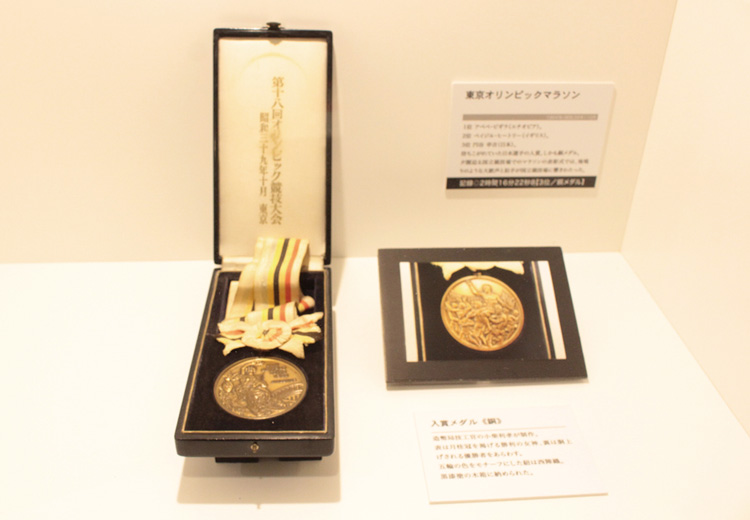 ↓Color faded shoes and old newspapers eloquently tell us how much time passed. 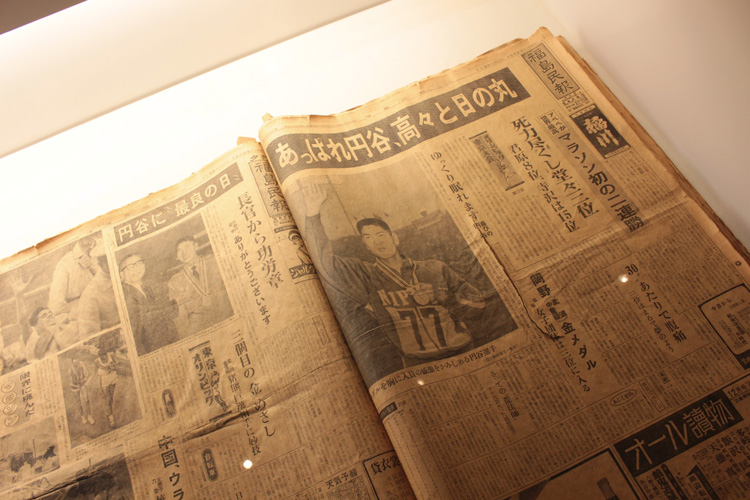 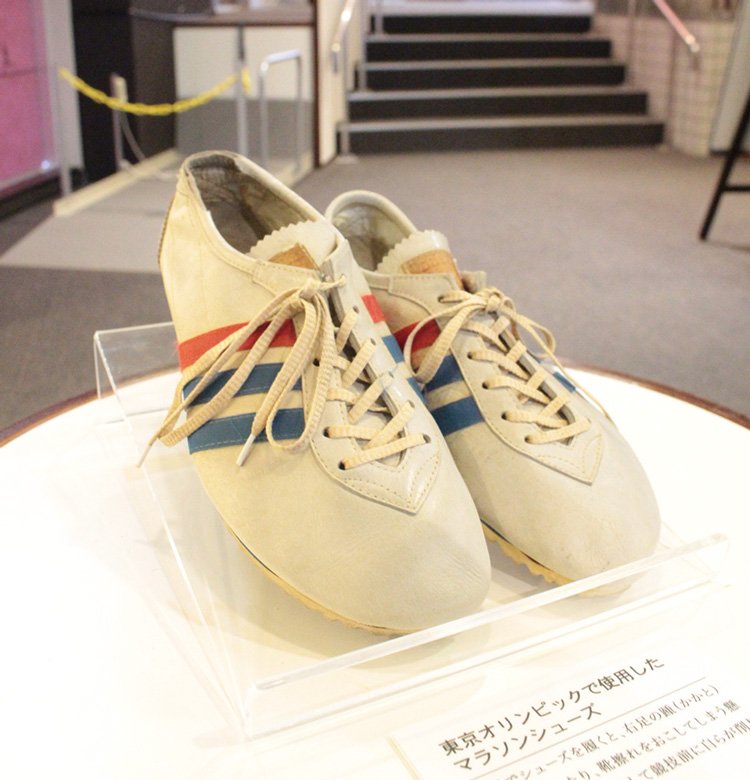 His running partner, shoes were added some adjustment to fit his feet. The fabric seems thinner than the ones of current products. The size of his feet was 25 cm, and his height was 163 cm, from which we can assume that he was not very big. 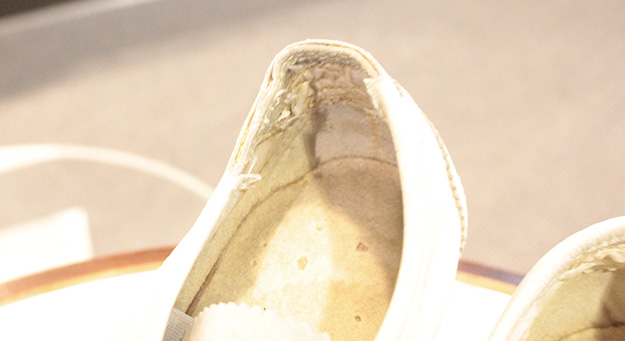 After the Tokyo Olympics, people put an enormous expectation on him to be successful in the following Mexico City Olympics. However, his situation went wrong; his trusted coach was moved; his engagement failed; he got a herniated disc and had a surgery; making time for training became difficult for his JGSDF career. Then in January 1968, the year of Mexico City Olympics, he passed away young, at the age of 27.

Now his cremains are in the grave of Junen-ji Temple in Sukagawa City. The farewell note he wrote to his family telling how much he had appreciated them is so heartbreaking. However, it was also recognized as a great writing with beautiful Japanese expressions, and deeply impressed some great authors in Japan. Also, this tragedy led to actions to support athletes’ mental health.

“Commitment”, “Dedication”, “Sincerity”, “Simple honesty”; these are the words crossed my mind after learning about him. He had a strong sense of responsibility, hard working mentality, honesty, and warm personality caring about family members, friends, and mentors. His life itself was like a full marathon, kept on running, trying his best.

It was a half day trip this time. In Sukagawa City, you can see proofs that Kokich Tsuburaya truly lived, and traits he left. I guess you will like him more if you see them.

Visit this place if you want to know about Kokichi Tsuburaya!! They carefully maintain and exhibit things related to him, such as shoes and uniforms he used, medals, and trophies. 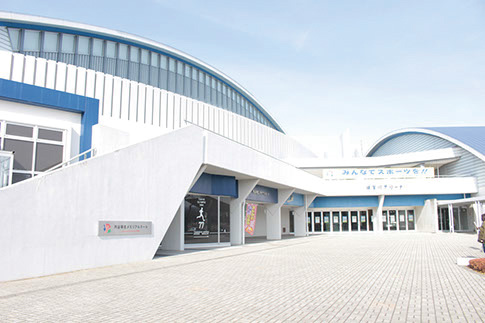 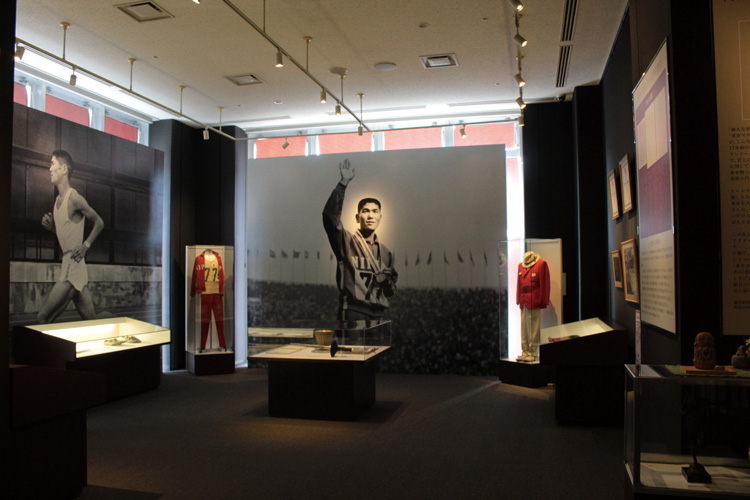 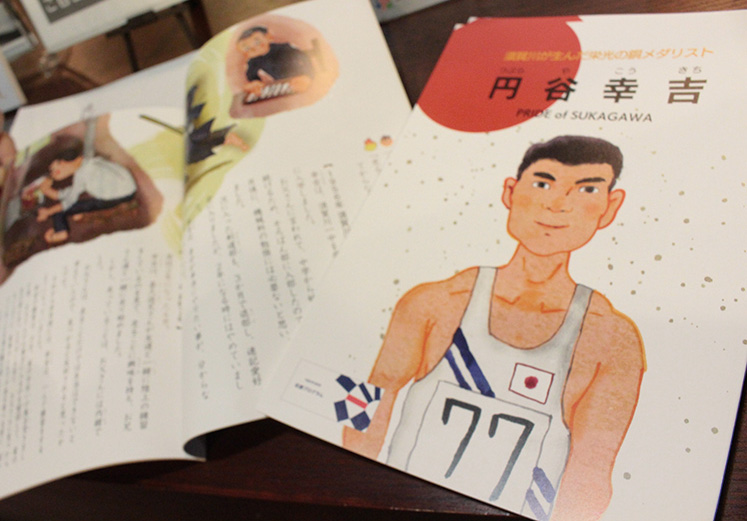 ↑A picture book about him. Easy to read for kids. 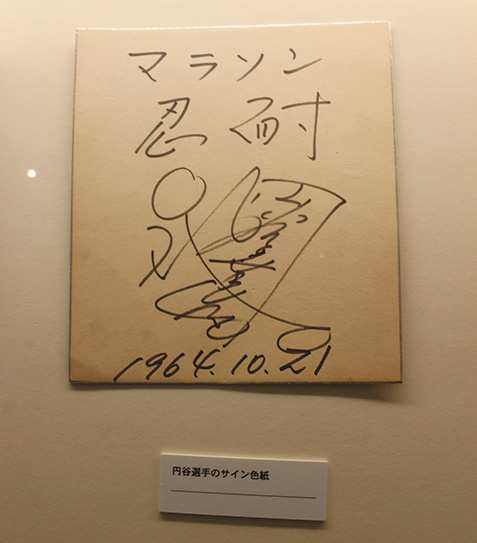 ↑“Endurance” is the word he often wrote on his autograph.

↓A bench used at the National Stadium. You can watch an old coverage video. 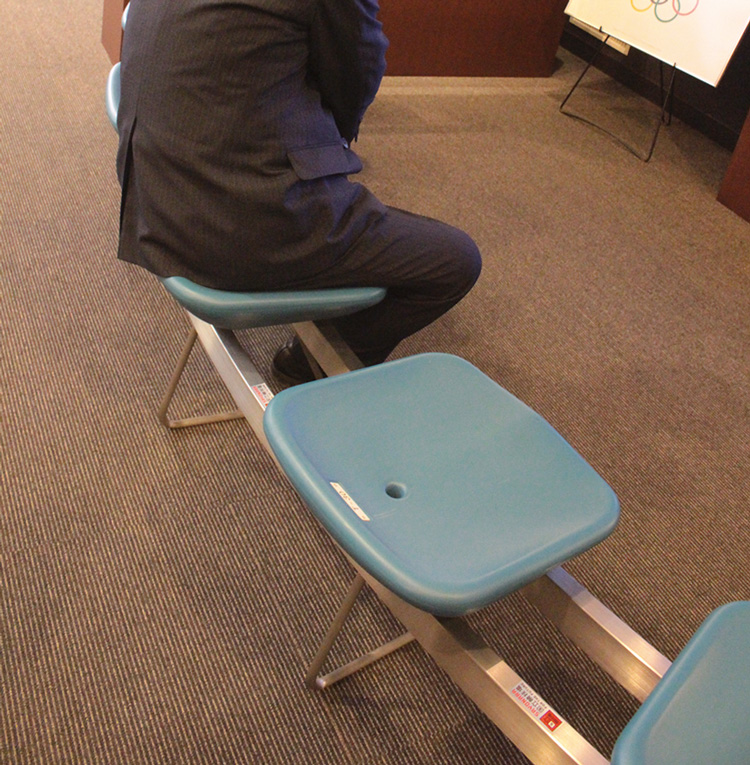 Located at a pocket park in Omachi, “Yotteke Square” along the Old Oshu Kaido Road.
There is a monument and a storytelling equipment called “Story Box” with which you can read and learn about him in a similar style of Kamishibai (Traditional Japanese storytelling). 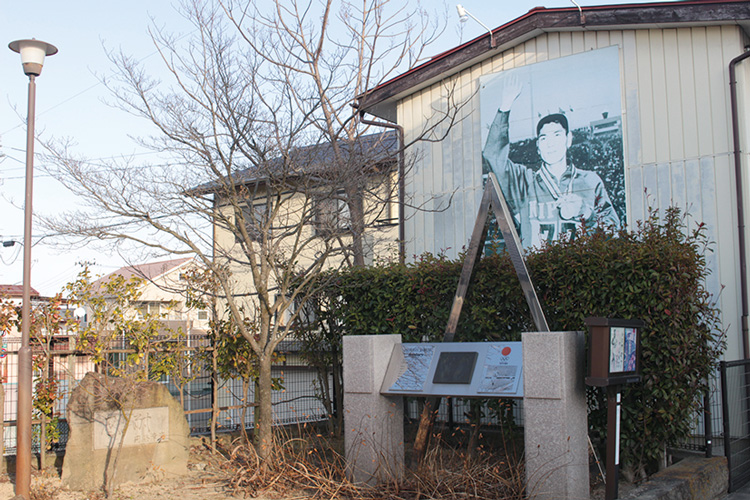 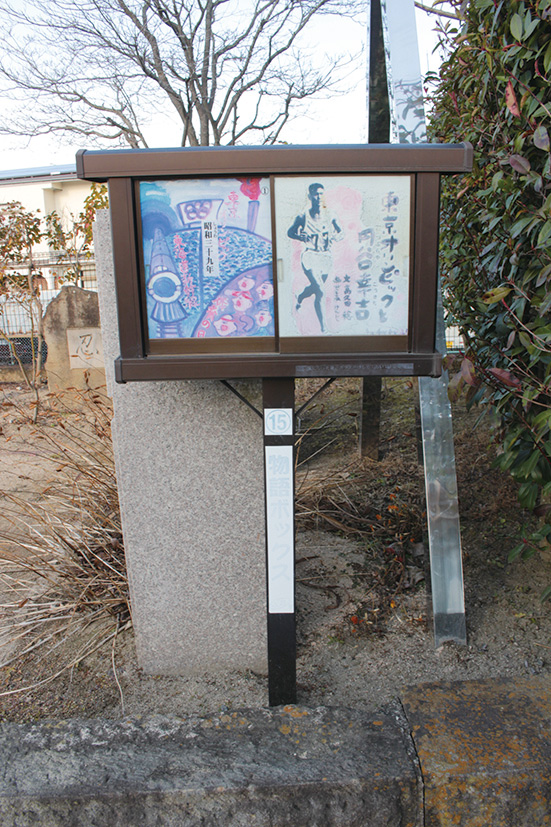 Slide the pages to read. It would be nice to place it back in the starting position after reading. 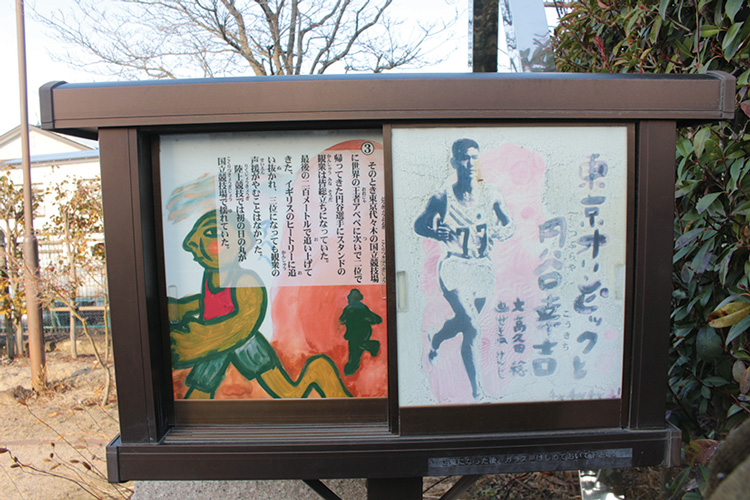 Look at these feet!! He stepped on the world’s stage with them!! 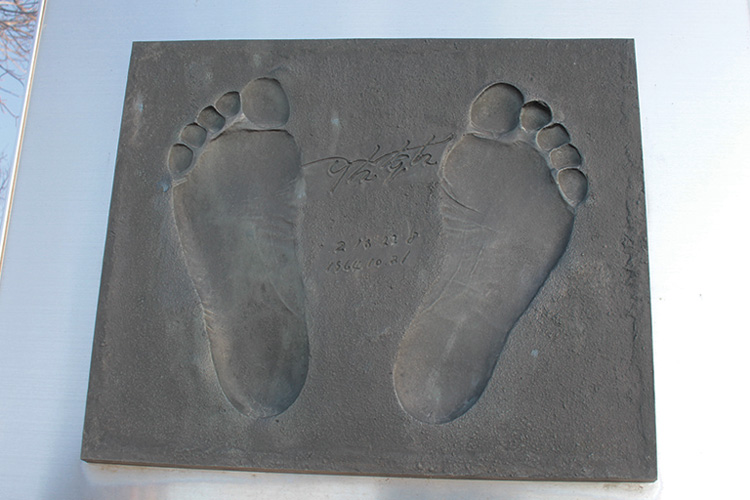 Confection in honor of Kokichi

Japanese confectionery shop close to the birthplace of Kokichi Tsuburaya. They say he and his brother often shopped there. They sell Western-style confections, such as crème puffs and rice flour roll cakes with whipped cream inside, as well as Japanese traditional ones. It seemed worth trying both kinds. 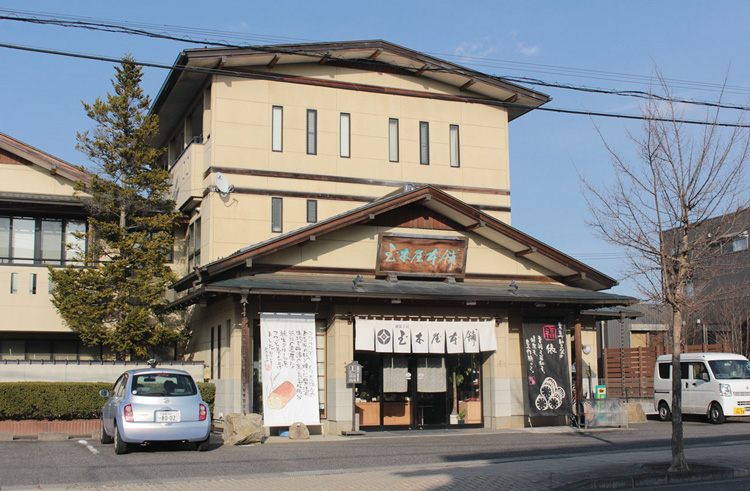 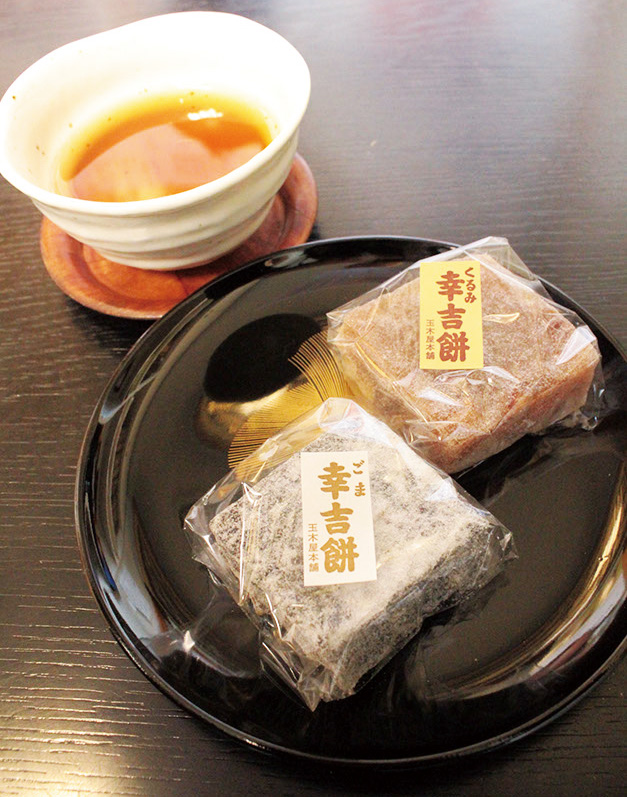 Kokichi Mochi is a long run product which had been invented before the Memorial Marathon started. They invented the confection made from mochi rice after asking Kokichi’s brother since his cheering party for the Tokyo Olympic 1964 took mochi sweets. Runners who participate in Kokichi Tsuburaya Memorial Marathon visit and buy for souvenirs.

Kokichi Tsuburaya Memorial Marathon is a marathon race event in honor of Kokichi from Skagawa City. Started in the 58th year of Showa (1983), aiming to encourage new athletes to be successful in the world like him. It will be held on Sunday, 20th October this year, 2019. You can run the same road he used for his training. 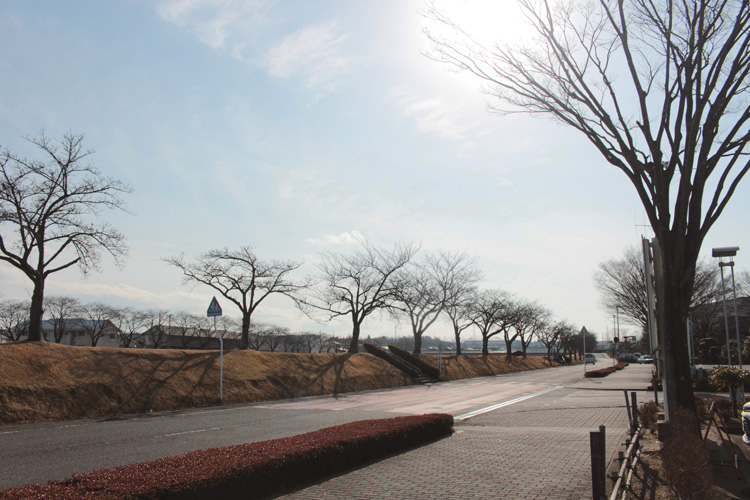 They say he used to run home all the way to Sukagawa City on his holidays even after entering Camp Koriyama of JGSDF. The reason why he went home was because “he wanted to eat his mother’s food”. I heard so many stories about how much he and his family loved each other.

Ohme Marathon was called “Ohme Hochi Marathon running with Kokichi Tsuburaya” at its first time. Ever since, this event has been popular among city runners. 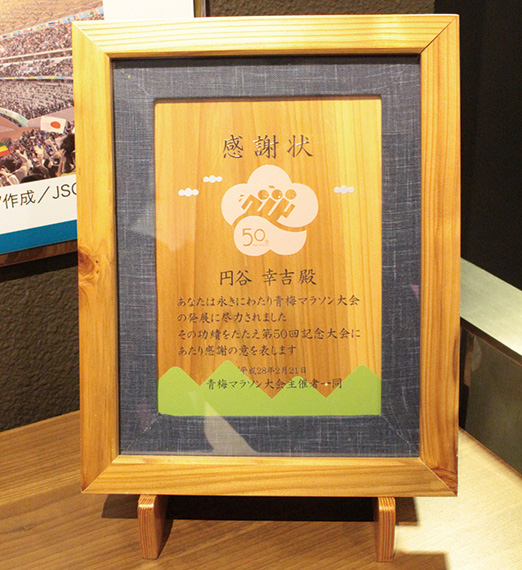 In “Male Ekiden Prefectures Match 2019” on Sunday, 20th January, Fukushima won the first prize with the time of 2:19:43 for their first time. It was also the first time for one of Tohoku Prefectures. Fukushima is called “Ekiden Kingdom”, and has been trying to develop athletes to be a “Kingdom of Track and Field” since before. The result seemed to come from the efforts.