The return of the Rugby’s legend!
The tackle interview with Hitoshi Ohno, from Mihota-machi, Koriyama City,Fukushima. 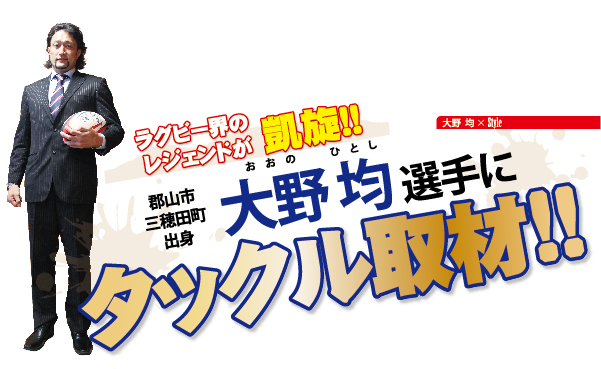 The national team of Japan shocked the nation and the world in the 2015 World Cup with their impressive plays! The game, Japan versus South Africa has been selected as the best moment in the entire history of World Cups by many Rugby fans around the world. The key player of such an incredible team, Hitoshi Ohno is our guest for the interview.

Mr. Ohno, why do you think the team Japan did great job this time?

It is the largest amount of training in the world. In Miyazaki Camp in June, the amount of training was somewhat outrageous, and we started in the early morning to do three trainings a day. At the end of each training, when I wrang my jersey, so much sweat came out. In a real game, small mistakes in judgement can lead to a loss, so we practiced to make a cool-headed decision by making a difficult situation. I think it worked out well this time. Also, the scrum has become our powerful weapon for the win. In the game against South Africa, we also formed the assured scrum and kept the ball, which led to the final points.

The game again South Africa ended with the great win. How were you feeling during the game?

During the game, I just kept thinking to win. That’s it. The game was like when they got a point, then we got it back. So we all believed that if we keep the ball, we were going to win.

How did you start Rugby?

I had played baseball until I finished my high school. But my friend in the Rugby Club at Nihon University passionately scouted me. So once day I went to the Rugby ground and I felt that the team had a great atmosphere. I wanted to be part of them. That’s how I started.

Rugby is a very hard sport, but what is the charm and real pleasure of “Rugby” for you?

I guess you can do extraordinary things on the Rugby ground, like tackle or drag your opponent with a ball.

Do you have routines?

I used to shave beards before games, but now I do not have anything particular. I try to improve my concentration on games.

What is your favorite thing to do after the training or during day-off?

I drink quite often. After the World Cup, I went drinking with the team members whom I spent four years with. It was the best time.

What is your goal?

I want to play again as the member of the national team in the 2019 World Cup, which will be held in Tokyo. Also, thankfully Rugby has gained attention in Japan these days, so I want to maintain the popularity, not as a trend, but as culture. 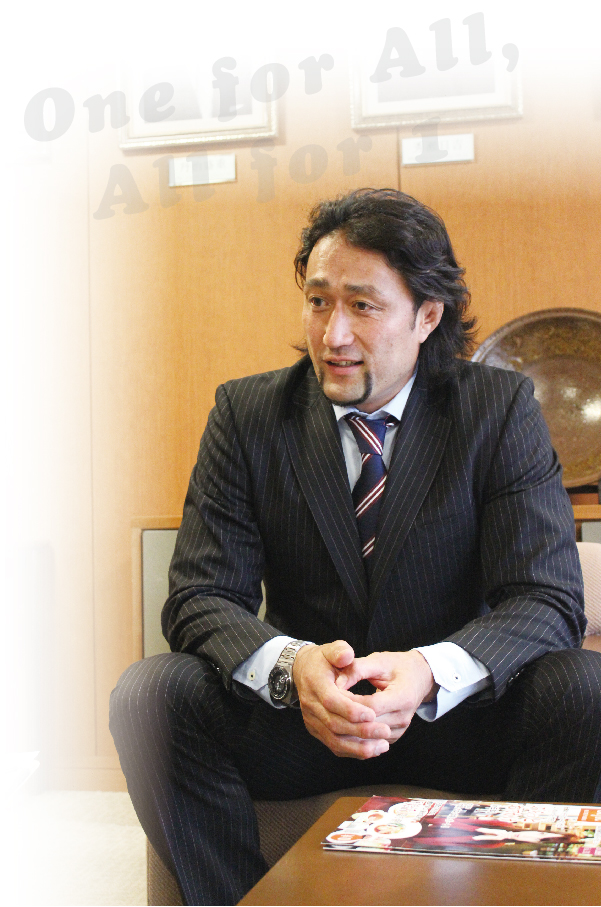 What is your message for the kids in Fukushima who plays Ruby or those who wish to be a Rugby player?

Rugby is the kind of sports that anyone can make use of their characters. There are various positions that you can choose from, so you don’t always have be a fast runner or very good at kicks or passes. If you are interested, I want you to come to a Rugby ground and touch an oval ball. I know that the situation in Fukushima is still not easy, but the energy of children will be sent to the world as the energy of Fukushima. So I hope that people smile through Rugby. To the kids who play Rugby now, I want you tell your friends how fun Rugby is.

Please provide us a message for local people.

Thanks everyone for your support. When I went back in August before the game, I saw the temporary housing near the Big Palette Fukushima. I felt that Fukushima is still in the recovery so I wanted to give cheer to you through the game. In the next 2019 World Cup, Koriyama and Iwaki can be the training camp location. What I felt in this England World Cup was that people welcomed us with warm heart everywhere we went. Fukushima has great food and friendly people as well. I think people in Fukushima have great hospitality, so if the training camp is going to be in Fukushima, I need your support because we have to show the world how great Fukushima is.

Thank you so much for your time on the busy schedule. Mr. Ohno was the gentle man and above anything else he had the aura. He shook my hands powerfully with the big hands. He has an attractive personality and charming smiles. Let’s keep on supporting and following the success of Hitoshi Ohno and the national team! 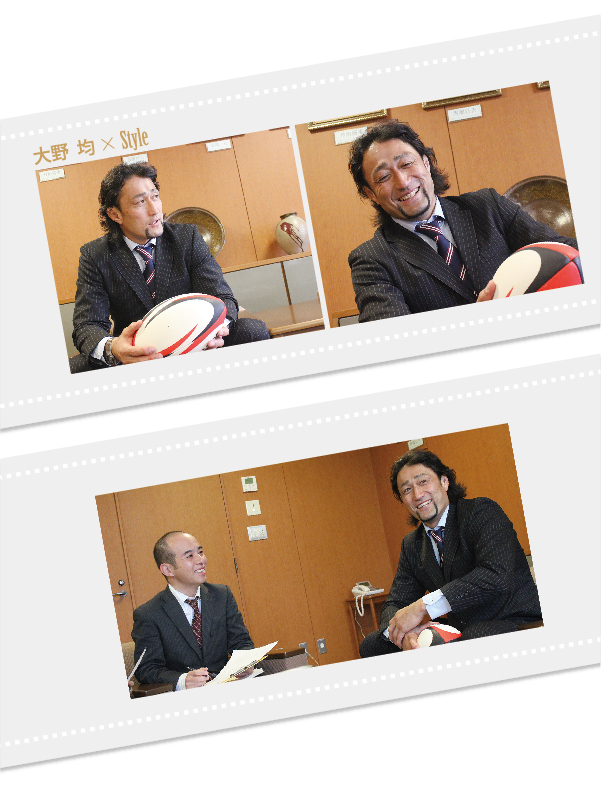 【About Mr. Ohno’s childhood. A story from the vice president of his fan club 】

What kind of a child was Mr. Ohno?

Kin-chan was absolutely kind. He never hit nor bullied anyone. As the oldest brother of four siblings, he helped his parents with housework. He also did a paper route. He studied really well, so he acted as the student representative in the high school. Since his parents are the daily farmers, he drank milk three times a day. He has been quite big since he was a child. I thought that he was going to get a job in the hometown and helped his family business. But he started Ruby from the university, which opened up his career as a Rugby player and joined TOSHIBA. His family also supported him.
Rugby is the kind of sports that requires the battling spirit, so his kindness can be a disadvantage, but he has overcome this with hard work. He proved that
“Hard work pays off.” 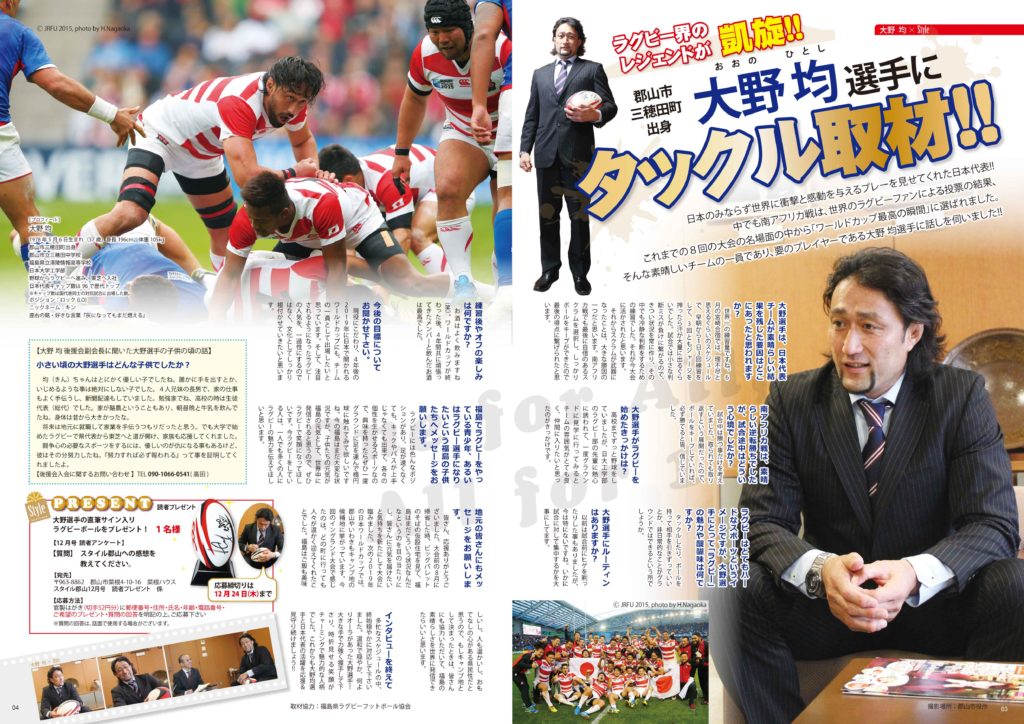 The double-page featuring Hitoshi Ohno
※Currently we do not accept the present application.