“Nasubi”, when many Japanese people hear his name, they immediately recall a past reality show’s segment, Denpa Shonen-teki Kensho Seikatsu. While bearing up under a life being commanded to stay in an apartment room for a long time alone, he delivered laughs to audiences and moved their hearts. Since the stay-home request was issued for the coronavirus, in Twitter, he kept tweeting the importance of staying at home referring to his experience, which stimulated empathy of many people.
This time, we asked questions to this “Lock-down Survivor”, Mr. Nasubi, about his thoughts of now and then, and about various challenges he underwent after the show. Here are his precious stories told through our first video-call interview.

What is Denpa Shonen-teki Kensho Seikatsu?
One of the segments of a reality show, Susunu! Denpa Shonen, broadcasted on a Japanese TV corporation, Nippon Television, from January 1998 to March 1999. Under the project’s theme, “Is It Possible to Live off Only Prizes from sweepstakes?”, he challenged to make a living only by winning products until their total prices reached to 1 million JPY. It consisted of two volumes: one in Japan and another in Korea, and made him extremely popular. 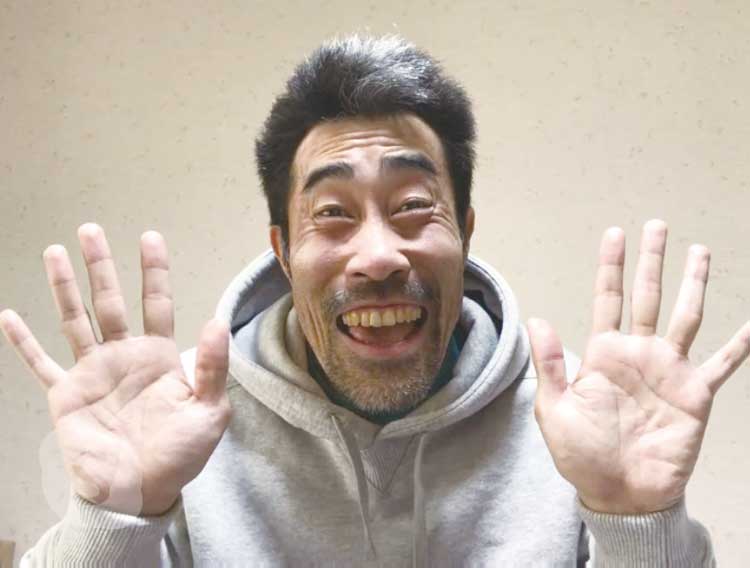 Life of Being Locked Up: Sweepstake Days

Q. What were harsh or made you happy? What were you thinking at that time?

― Everything was harsh and every day was like hell back then. It was like the current “lockdown”, but all by myself, and there was a pressure that I wasn’t allowed to go outside. I couldn’t get food and clothes until winning ones from sweepstakes. I even had to eat only dog food I had gotten from a prize contest for a while. No bedding was provided either, so I used a zabuton cushion as a pillow, folding in half.
But the hardest thing was not to be able to see and talk with anyone. My mental condition was at its worse. I was like, “Why only me? Why do I have to do all these things? I’d rather die than feel like this.”
Every day, I just did the same thing: writing hundreds of postcards, which got me down more mentally rather than physically. Although I seemed looked like I was having fun most of the time on the edited show, to me, it was full of pain.
Meanwhile, it felt good when I was getting close to the goal. Winning a prize gave me a small piece of hope every time, which made me manage to get through a year and three months.

Q. As a wisdom for the current stay-home situation in Japan, would you give us a tip “How to stay positive”?

― That would be to find a little pieces of happiness in daily life while managing to sort out your feelings.
For me, the standard of happiness is low. Like, compared to the sweepstake days when I had to eat dog food, I am happy with having even one meal of human food a day. It’s fine without side dishes. Now, in the stay-home situation, many people may be having difficult time to pursuit their “standard of happiness” as high as usual, so lowering the standard a little bit would work.
Of course, the current situation is different from the one I was in two decades ago, but when think about the circumstance that the battle against coronavirus outbreak is viewed as an actual war in some other countries, giving up on going out for a while would not be a big deal. We just need to hold on.
Also, if we think about the people who are desperately trying hard on the front line, such as the ones working for medical and nursing facilities, financial and IT services, and logistics and transportation companies to protect our society, we need to be patient to reduce their burdens. And I think, we also desperately need to behave properly to protect the people around us. We need to be more thoughtful. Not like “it’s OK as long as I am OK.”
By being deprived of freedom all of a sudden, many people must be frustrated with the inconvenience, but staying in a house for one month or two months won’t kill you. I proved it in a sense by surviving from the days being locked up for a year and three months.

Q. What made you climb Mt. Everest?

― After 311 (2011 Tohoku Earthquake and Tsunami), I wanted to find something I could do to repay to my home prefecture, Fukushima, along with Tohoku. I thought that, maybe, by attending restoration events and playing a role as one of the leading people, I could help attract attention to Fukushima, or make a chance to get rid of suffering from harmful rumors. And that if people in Fukushima saw me trying hard, maybe, they could feel empowered… That was when I was told, “there should be something only you can do. That’s what you should find.”
And I was also recommended to take a prayer trip, Ohenro Pilgrimage, so I visited 88 temples in Shikoku. Although with no experience of mountaineering or trekking, I finished it twice as fast as normal people. Then I was told again, “You are probably good at climbing mountains”, which is one of the reasons why I went for Everest. And after some other things happened, my decision was made to aim for the mountain. I thought that mental restoration would also be important as well as financial and physical support.
There was the time when I was turned down for sponsorship since it was an individual project and contained a possibility that someone might lose their life, or criticized that I was trying for the fame or piggybacking. But I kept going forward for the “mental restoration” that could encourage people in Fukushima, or Tohoku, by me trying hard.

Q. How did you feel when you faced a difficult situation three times?

― Yeah, we tried three times, and each time an accident happened such as an avalanche and earthquake, we had to give up our plan against our will. Many times I thought that it was the end. But thanks to the support of the Fukushima people, I could stay strong. And I ended up thinking that I could do more, compared to the harshness of my sweepstake days. It may be a little too much to say that the climbing was, or the current (corona) situation is the mind training, but my past experience helped/helps me a lot.

Q. What did you think when you succeeded to climb to the top for the fourth challenge?

― Since my goal was “to bring a smile to the people in Tohoku”, when I reached to the top, I felt relieved that I had finally fulfilled the promise, thinking that hopefully I managed to make them smile. But mountaineering accidents happen more often on the way down, so I felt rather worried whether we could go down safely than accomplished or satisfied.

Q. What did you feel about your hometown and the world after going abroad?

― Even outside of Japan, I kept wearing a traditional Japanese coat, happi, as a symbol of supporting Fukushima. Some people over there asked me, “What is it?” and they continued, “Is there any people live in Fukushima?” or “No one must live there. Anybody?” That made me feel that, to the world outside of Japan, Fukushima’s clock had been stopped since the tsunami and earthquakes. Probably many people overseas still think that way. That’s why I believe we need to keep sending messages.

Q. What come to your mind about Fukushima?

― I visited the Chernobyl Nuclear Power Plant in 2017 with the thought that I might find a future for Fukushima to aim for. By getting permission, tourists can visit the Unit 4 building which exploded in the accident, and about hundreds of thousands of people go and see the place of the “negative legacy”. And I saw workers walking around while smoking cigarettes as if there was nothing wrong with it, which made me think that the three decades changed the situation so much.
I also visit “Ichi-F (=1F, Fukushima Nuclear Power Plant 1)” on a regular basis like once or twice a year. And through my power plant trip, I saw a possibility that Fukushima can change the world’s perspective from negative to positive. It would take time, but may be possible that Fukushima will eventually “succeed to dismantle the power plant” and open their study results that would draw the world’s attention to the public.

Q. What is your driving force?

― Like I said, my standard of happiness is really low, so actually, I can be happy ridiculously easily. But when more people around me are happy, that sometimes lead to my happiness unexpectedly. I am happy too, if people around me can smile or be happy by something I do.

Q. What is your goal from now on?

― I started as a comedian, but originally entered into the entertainment industry to be a comedy actor. My purpose of climbing Everest after the great earthquakes was not mountaineering itself but to bring a smile to someone. It is difficult to define my career, but if I had to say, it would be to make things happen or live up to things someone expected my career “Nasubi” to achieve as much as possible.
I would like to stand by what people want from me as close as possible, by searching the things that can bring a smile to many people. What I really want to be may be found after thoroughly pursuing those things.

Q. By the way, which Nasubi (eggplant) dish do you recommend?

― I am not sure about eating my family haha. But I’ve heard that eggplant is a very watery vegetable and less nutritious, so it is kind of a shame haha. But at the same time, I’ve also heard that eggplant goes well with oil, so…my recommendation would be eggplant tempura or stir-fried eggplant with chili sauce. 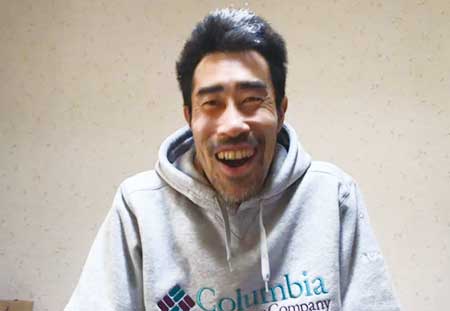 Would you say a few words to our readers?

― I was born and raised in Fukushima prefecture and am connected to the all three areas of the prefecture because my father is from Iwaki, mother is from Aizu-misato Machi, and the house I was raised in is in Fukushima City. Since my background has elements of each area, Fukushima is so important to me. For those who live in this prefecture, I would like to keep sending messages that can make them smile or empowered, and to stay close to Fukushima. So, let’s liven up Fukushima together, and I am looking forward to your continuous support!! It would be great if I could get a long-time support like my (long-shaped) face. I will support Fukushima as long as possible.

All through our interview, Mr. Nasubi was so gentlemanly. From his fine talk and the content, his thought for Fukushima, sincerity, diligence, and integrity were felt. As he mentioned many times, he deeply wishes for “someone else’s happiness”. He is such a nice guy with a great personality. Also, with a charming smile!

Nasubi is an actor and entertainer from Fukushima prefecture, Japan. To energize and encourage, and to bring dreams and hopes to Fukushima, he aimed to reach the top of Everest. Despite of giving up three times, he eventually succeeded for the fourth challenge on 19th May 2016.
Currently, he is designated as the Ambassador of Attaka Fukushima Tourism Exchange of Fukushima Prefecture, Ambassador of Mountain Day (national holiday), Special Instructor of Urabandai School of Furano Shizen Juku, and Ambassador of Mt. Adatara Tourism. 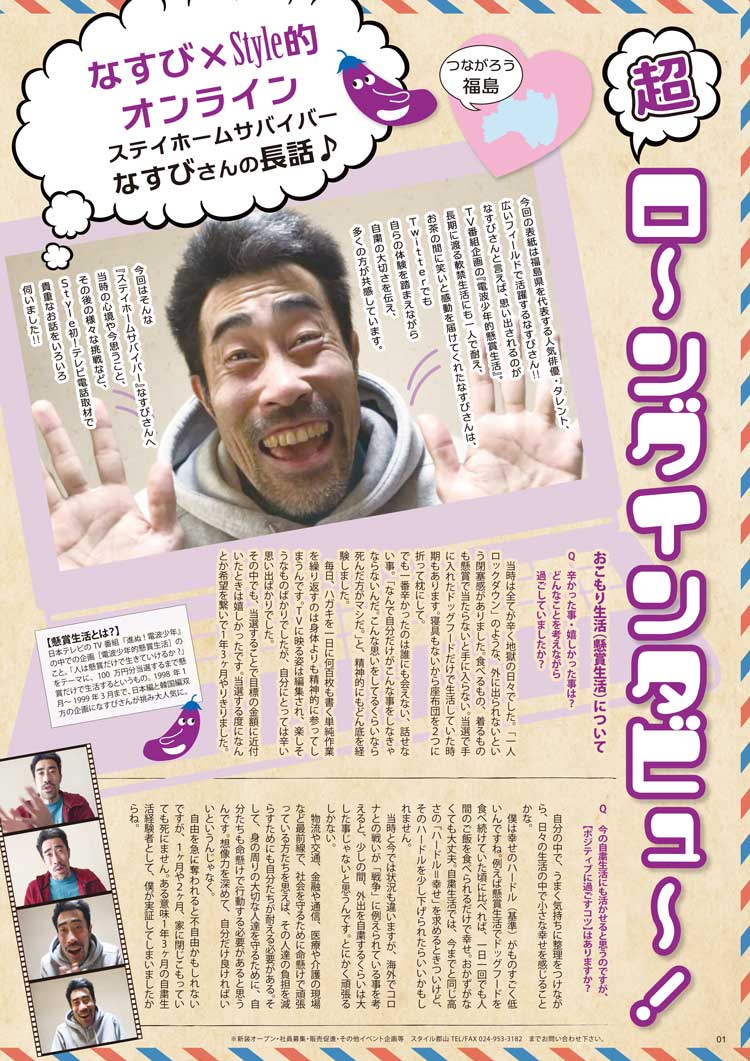