Long interview for his triumph return

On a fine autumn day of September 17th (Monday), the award ceremony of Fukushima Prefectural Honor Award was held in KORIYAMA VIEW HOTEL ANNEX inviting an actor Toshiyuki Nishida.
Toshiyuki Nishida is the 4th winner of Fukushima Prefectural Honor Award and this is another happy event for him after receiving Spring Conferment of Decorations (Grand Cordon of the Order of the Rising Sun) in 2018.
The award ceremony was held in public for the first time and local residents showed a strong interest.
Style-Koriyama went to the award ceremony to cover the feelings he expresses for receiving this award!! 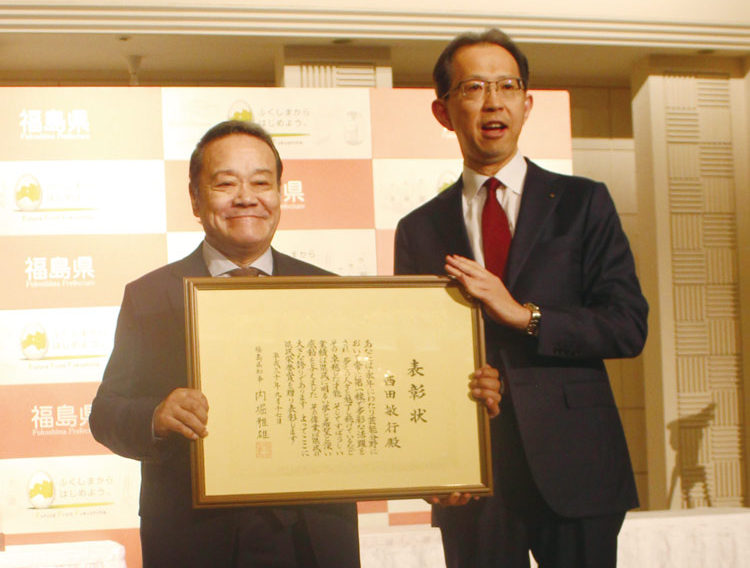 A large number of press crews and about 300 audiences who were chosen by lottery assembled at the venue. A lot of fans from small children to the elderly people gathered there. Mr. Nishida made the comical actions with open arms immediately after getting on the stage. He instantly made the relaxing atmosphere in the venue.

Local residents are also excited with the award ceremony. 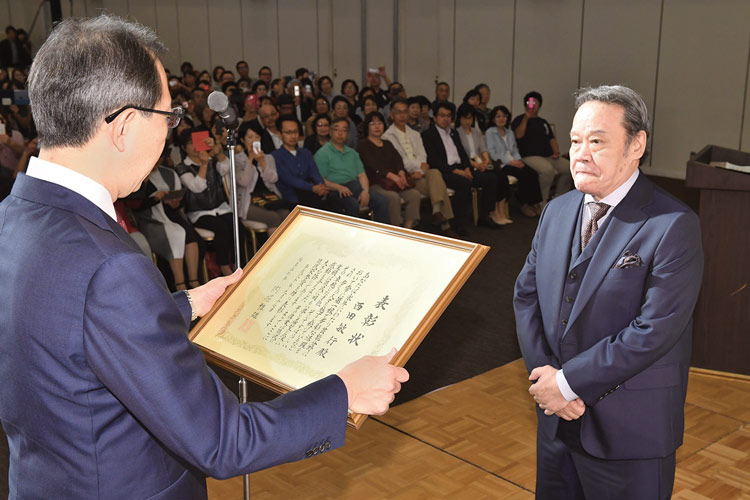 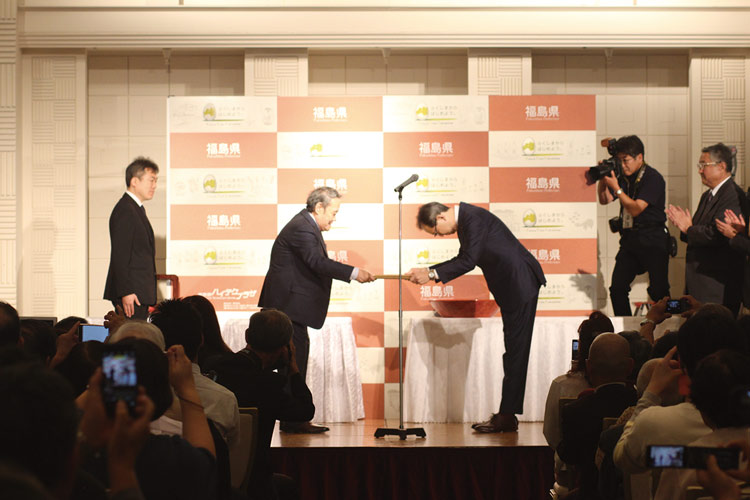 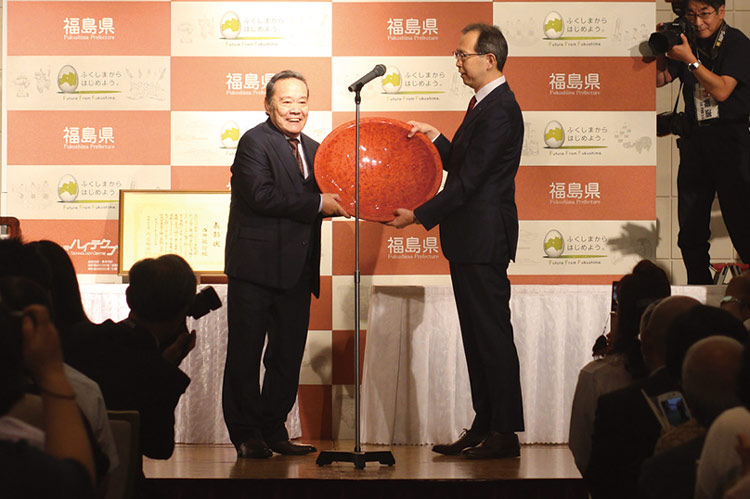 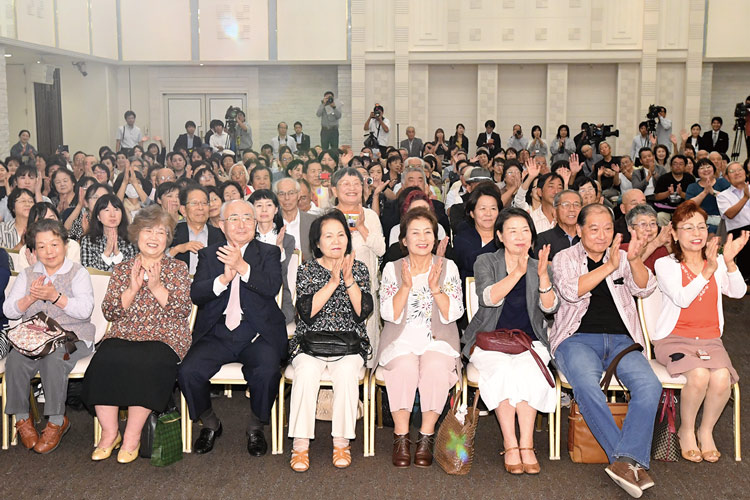 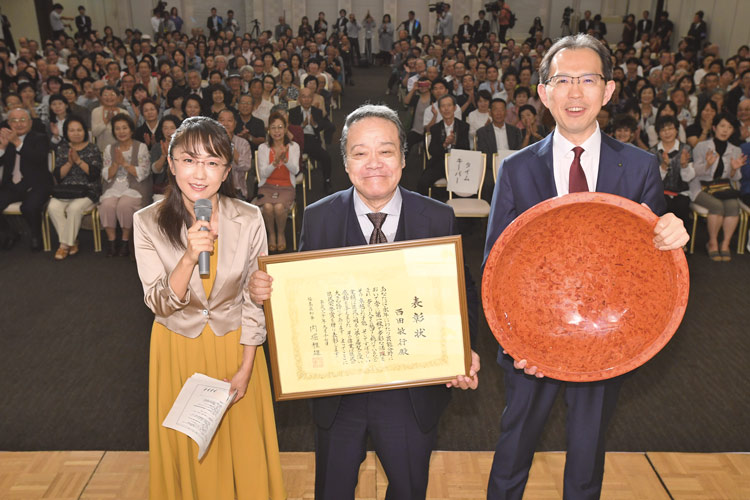 The award ceremony was followed by a talk session. As much as time permits, he talked frankly about his thoughts on winning the award and feelings for his hometown while making the audience laugh from time to time. 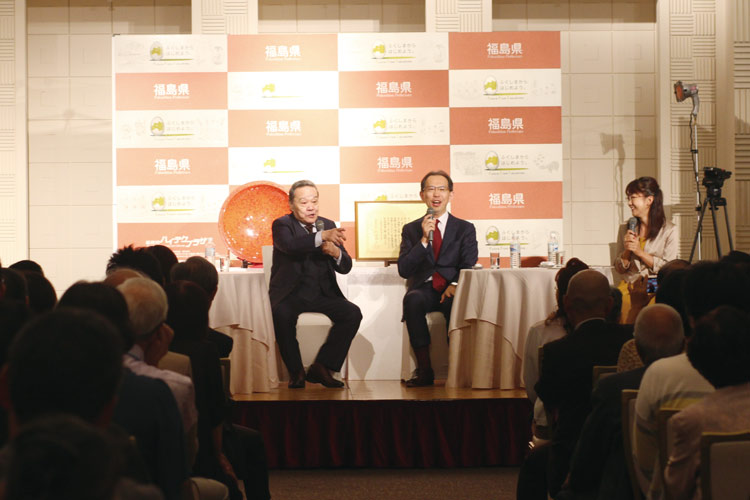 [The reason to be awarded]

(Governor) I have two reasons for sending Fukushima Prefectural Honor Award to him this time.
The first reason is because Mr. Nishida is a wonderful actor who is recognized nationwide. He takes part in a wide variety of activities such as an actor, singer, presenter and narrator. He makes people smile and gives us courage.
The second reason is because he rushed here and cheered up Fukushima in a big voice during “Fight! FUKUSHIMA” campaign after the Great East Japan Earthquake. He also participated in a PR video which Fukushima prefecture made for reconstruction.
Fukushima Prefectural Honor Award does not belong to Fukushima prefecture or governor. I think fans that support him from all over Japan send this award to him with the feelings of “Thanks, as always ever” and “Keep doing your best”.

[How do you feel now after being awarded for Fukushima Prefectural Honor Award?]

(Mr. Nishida) I feel so happy to be born and raised up in Fukushima. My parents are not from Fukushima but I have been in love with Fukushima where I was born and raised up.
I am glad that I could receive the award but at the same time I feel embarrassed wondering if I deserve this award. However, I feel proud of myself that I have always been thinking of Fukushima while working as an actor. I am not sure how many more years I can continue acting, but I take this award as an encouragement to keep on living as an actor while thinking of my hometown Fukushima. I would like to continue transmitting messages as a citizen of Fukushima prefecture. 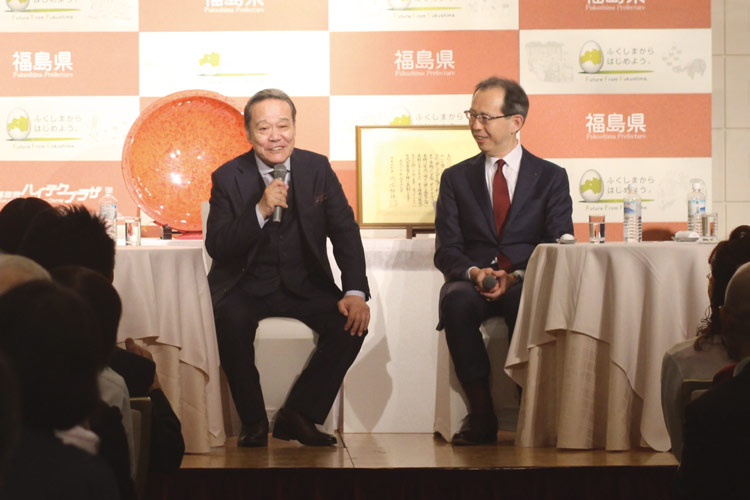 [Episodes from His Childhood]

(Mr. Nishida)
I thought Lake Inawashiro was the sea when I was a child. I was wondering why water of Lake Inawashiro was not salty until I saw the sea in Iwaki for the first time.
I used to play in Abukuma River with friends in summer. I would often clean cows with rope for “Beko-Arai”. I sometimes got peed on by them. I think these experiences enriched my sentiment.

[Experience of his father’s death and his mother’s remarriage in his childhood. He was raised by his mother’s sister and her husband after being adopted by them at the age of 5. He often visited movie theaters with his adoptive father who loved watching movies.] 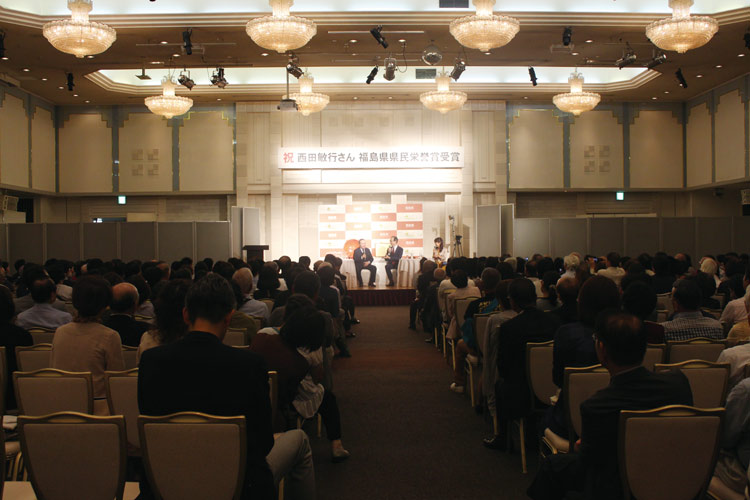 [Started as an actor after moving to Tokyo]

(Mr. Nishida) (Looking back the dialogues and expressions used in the plays at that time) I tried not to see my hometown friends since only beautiful expressions could be used in the world of acting at that time. I skipped class and went to Ueno Zoo whenever I got homesick. There was a gorilla named “BulBul” from Africa in the zoo, and “BulBul” who came from a faraway place synchronized with my homesick feelings. I would have hugged him if he had not been in the cage hahaha. Since then, I went to see “BulBul” whenever I missed my hometown.

(Mr. Nishida) The secret is curiosity I have had since I was a child. I was filled with curiosity when thinking about fun things. I think this curiosity is supporting my life as an actor.
I really thank my father for giving me the opportunities to watch a lot of movies. I learned everything from the movies such as adult manners and etiquette.
I got positive thinking as I was brought up in Fukushima where people are laid back. My action guideline is “Shosuke Obara” hahaha.

[About being a performer and an actor] 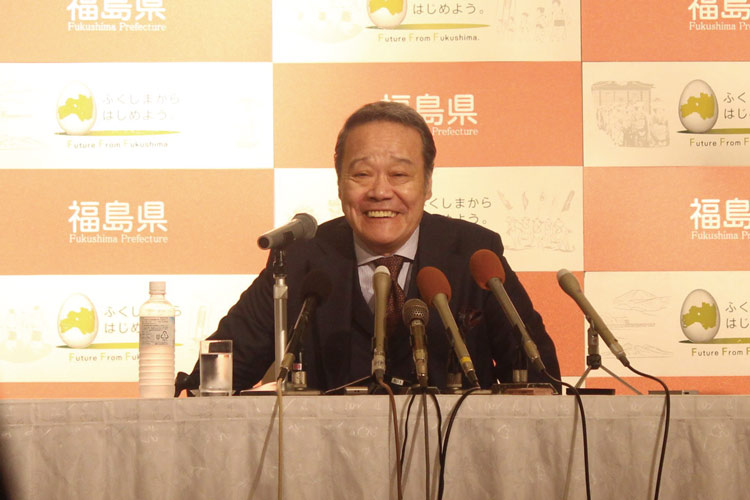 Toshiyuki Nishida is from Koriyama city. He spent his boyhood in Koriyama and then moved to Tokyo to study acting after graduating from junior high school. He debuted as an actor in 1967. Since then, he has steadily built his career and appeared in various films such as “Tsuribaka Nisshi”, “Ikenaka Genta 80 km”, and “Outrage”. He also takes part in various activities such as a singer, presenter and narrator.

●What is “Fukushima people” for you?↓